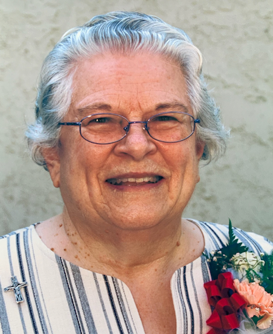 Sister Mary Sheila, the oldest daughter of William and Eva Fay, was born on February 24, 1933 in Waterloo, Iowa. In 1936, the family moved to California. Three years later, in 1939, the family moved to Maywood. She and her two younger brothers were blessed with parents who provided a Catholic education for all three of their children through high school. Sheila earned a scholarship to Immaculate Heart College and by the age of 22 she had earned a BA in Mathematics, knew she wanted to be a teacher, and prayed about a religious vocation.

Following her graduation from Immaculate Heart College, Los Angeles, in 1955, Sheila entered the Sisters of Notre Dame whom she had met as an elementary student at St. Rose of Lima School in Maywood.  Sheila was invested as a novice, receiving the name Sister Mary La Tier. She later returned to her Baptismal name, Sheila.

During her forty-four years in secondary education, Sister had the distinction of ministering as a teacher, counselor and/or administrator in all four of the province’s high schools. In 1996, she spent the summer in Poland teaching English to a group of young sisters under the auspices of the United States Council of Catholic Bishops.  Moreover, for fifteen years, Sister volunteered as a reader at Recording for the Blind and Dyslexic. Although this ministry entailed a lengthy commute each week to the studio in Hollywood, Sister later commented,  “this service [was] so important to me.”

Sister Mary Sheila loved to read and to travel. In 1977, she participated in the inter-congregational pilgrimage to Namur and later in a Congregational Pilgrim to Rome. More recently, she made “road trips” in the company of Rene Tedesco whom the Fays considered a “fourth daughter” to visit the Native American sites and National Parks in South Dakota, Utah, and Arizona.

Sister was especially close to her two brothers and Jim’s three girls. She devoted her time to e-mailing her nieces her memories of their father and uncle, since she was now the only source of the family’s lore.

Perhaps the quality which most endeared Sister Mary Sheila to her sisters was her ability “to listen.”  She gave to each sister her full attention and wise advice. Each came away feeling supported and loved, knowing that whatever they had shared would be held in confidence. Sister Mary Sheila was truly a “Wisdom Woman.”

Sister Mary Sheila spent her last years at Notre Dame Center in community service and prayer. She went home to God very peacefully early in the morning of September 18, 2020.

May she rest in peace