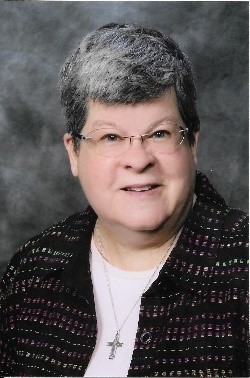 “Blessed are those who hunger and thirst for justice, for they shall be satisfied.” Matthew 5:6

Sister Pamela Marie embraced ministries that emerged from her heart, chose difficult tasks to assist those experiencing poverty and oppression, and gave herself totally in charity while working on systemic change. In the process, Sister raised the consciousness of many toward social justice. To the surprise of all, God called her to Himself while she was on mission in Texas.

Sister Pamela Marie spent 12 years teaching junior high students, and ten years teaching computer science and math in high schools of the Toledo Diocese. She was known for her excellence, intense preparation, and friendliness toward her students and colleagues.

Sister was the Provincial Treasurer for the Sisters of Notre Dame of the Toledo Province from 2003 to 2013, when she was best known for her passion for promoting socially responsible investments. In 2012 she was named the American Project Manager of SewHope in Guatemala. Sister volunteered her time and talent by serving on the SND International Investment Committee, Interprovince Collaborative Taskforce, Peace and Justice Committee, at Cherry Street Mission, and the Toledo Urban Federal Credit Union. Sister’s missionary spirit led her to three immersion experiences, one in Papua New Guinea and two in Guatemala.

After studying Spanish, Sister Pamela Marie began social justice and immigration work in Texas in 2014. Then began years of volunteer ministry at ARISE and Annunciation House, as well as assisting in Dallas after Hurricane Harvey. While in Texas Sister led many groups on immersion experiences at the border. Sister was recently accredited by CLINIC as an advocate for those seeking citizenship. Just this month Sister was hired as a contact tracer for COVID19. She also had an outstanding gift of networking with people who had the same passion for the marginalized.

Sister witnessed love of neighbor by her spontaneous acts of feeding the hungry, giving drink to the thirsty, comforting the sorrowing, visiting the detained, and teaching those desiring an education. The marginalized people captured her heart as she responded to the call of God to be present to God’s people. May Sister Pamela Marie rejoice in Transforming Glory in the eternal dwelling place.