A Cheerful Festival in Our History 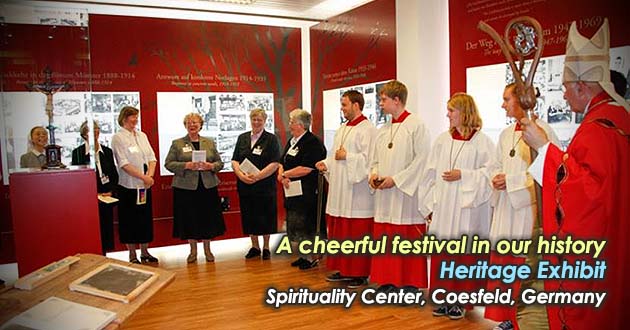 Coesfeld, 24 August, 2013: Blessing of the exhibition about the heritage of our congregation

For a long time, the sisters had been invited to a very special event here in Kloster Annenthal: the inauguration of the exhibition about the history of our congregation. This exhibition had been completed by many sisters with the help of the consultant and archivist Mrs. Sabine Heise and the designer Mr. Stephan Kube.

The first guests arrived before the 24th August: on Thursday three sisters from England, on Friday five sisters from Rome: our Superior General, Sr. Mary Kristin, with three of her assistans (one from the USA, one from Brazil, and one from South Korea) and the secretary general. The German general assistant had already been here for a longer time. On Saturday morning, some sisters arrived from the Netherlands, four sisters from the Sisters of Notre Dame in Namur (Belgium), and four sisters from the Sisters of Notre Dame from Amersfoort (the Netherlands). Further information about these two congregations can be found on this homepage under “history“. A great number of sisters from our German province also followed this invitation. For a “stand-up coffee“, the sisters gathered in the cafeteria and in the inner courtyard. As usual on such occasions, the pleasure of seeing each other again was great and so the noise level was rather high.