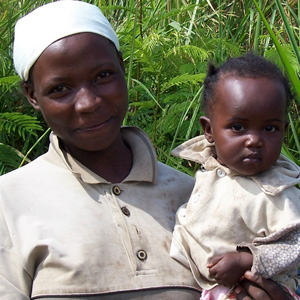 At present, I am working with the Maasai people in the ‘bush’ of Tanzania. It is a very interesting mission. In 2008, I began visiting this mission, 160 kms from Arusha city. The roads through the forest were in very poor condition.  But, now, they are much better–although during the rainy season we are completely cut off.  Most of the bridges are washed away in the rain, no transportation is available, etc.  We usually use a public vehicle.  We have to be patient when the car runs out of fuel in the middle of nowhere, or has 3 to 5 tire punctures, or breaks down. Cars carry people and all types of supplies (bags of rice, maize, beans, soda/beer crates, drums of fuel, goats or chickens, … whatever.)  It is quite challenging and interesting.

At the end of 2008, we encouraged the people to start pre-school lessons We had three young women, with their own minimum education of primary classes, conducting classes under the trees, and children writing in the mud.

Since 2010, we are connected to Notre Dame students from Munster, Germany, in collaboration with the Dialogue Project.  Around six or seven students arrive with two teachers, one Sister, two engineers and other trained persons, for 3-4 weeks.

In 2013, the work continued.  The people have given us some land for the mission. They support and collaborate with all the activities as far as they are able.  We always make them partners in our mission.  For example, they offered all the meat to feed 1000 people for a ‘Day of Blessing’.  All the people are part of everything that happens. The same thing happened when we honored seventeen elders in March, having a special day of celebration which included Mass and a special meal.  In June of 2013, we celebrated ‘Africa Child Day’. 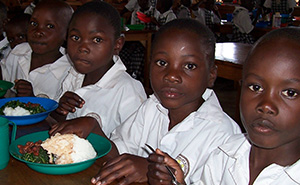 The people are shepherds.  So, they offer cows or goats for the celebrations.

Now we have 56 lively Maasai children.  Last year, there were 64 in the nursery.  Some of them were taken back home to help graze the cattle.  Some parents think that the children should take turns going to school.  There is much to be done.  The children are very smart.

In 2013, I also motivated the women to start Self Help Groups (SHGs).  The Maasai women do not own anything and so they are powerless.  Every man has so many wives.  I motivated the women to start their own small savings in the SHGs. I said that each one must own at least a goat before Christmas.  It was the season when there was grass and milk.  The women worked very hard and, in three months, had collected enough money to buy around 130 goats.  They themselves could not believe that it was possible.  Now they are much awakened to their own strength.

Since that project, I had a workshop for them about leather and bead working. They have done some excellent work.  Once the women are empowered, I know that many things will change.  I can talk more freely about the oppressive system that they face.