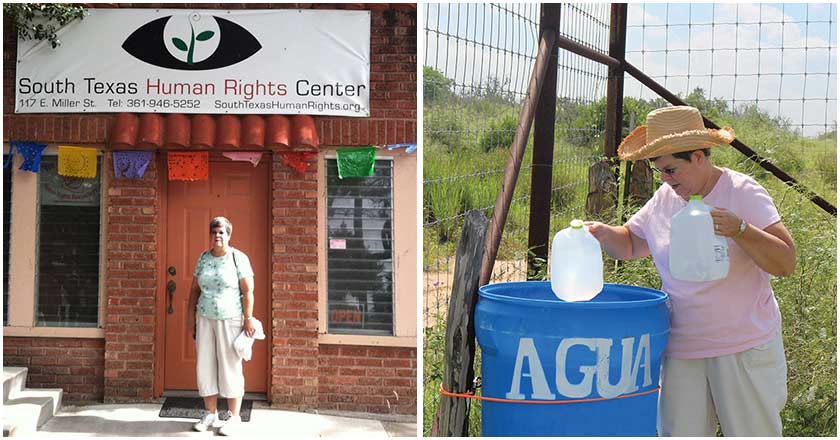 Sister Pamela Marie Buganski lives in the small town of Falfurrias, Texas, 70 miles north of the US-Mexico border.  Along with Eddie Canales, director of the South Texas Human Rights Center (STHRC), Sr. Pam is on a mission to end death and suffering among migrants. She and Eddie promote human rights and humanitarian efforts near the border.

Sister explained, “Families are fleeing the countries they love. They face a dangerous and uncertain future, but the refugees are willing to take that risk to save the lives of their children.”  Temperatures commonly rise to more than 100 and the Brooks County area has seen its share of death among immigrants from heat exhaustion or dehydration.  In 2012, the remains of 129 persons were recovered when randomly found on private ranches in Brooks County.

The work of the STHRC involves collaboration with universities, consulates, government entities, NGOs, and international organizations to locate those who have died and been buried as unknowns. Once bodies are identified through forensic science they are repatriated with their families.  Families of those who are currently missing and families of those who died years ago, contact the STHRC for assistance.  “We regularly interact with the media to tell the story of human death and suffering, and with legislators to educate them on the issues,” Sr. Pam added.

One hundred water stations on 1200 square miles of parched land have been placed and maintained with the assistance of volunteers.

Sr. Pamela adds a human touch of hope with visits to men, women and children at detention centers in Falfurrias, Karnes City, Pearsall, and Taylor, TX as well as in Adelanto, California. She volunteers at shelters and humanitarian aid centers.  “I believe that this work is a gospel combination of direct aid and systemic advocacy for human rights and dignity while being immersed in communities of immediate social need,” she concluded.