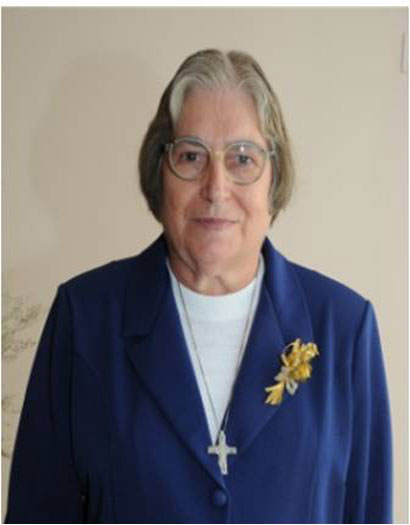 On the morning of August 12, 2015, the Lord of life passed through the Province of Our Lady of Aparecida and took Sister Maria Mirna home. As a grain of wheat that falls into the soil and produces fruit in its season, Sister Maria Mirna met the One to whom she dedicated all her love.

Genoveva was born on June 19, 1936, in Ibarama, county of Sobradinho. She was the daughter of Davi Capelletti and Josephina Balest Capelletti. The couple had 11 children, six girls and five boys. Genoveva was the first born. The foundations of faith and Christian values nurtured in the Capelletti family bore abundant fruit. Genoveva, at the age of 21, felt attracted by and called to consecrated religious life; and she entered the Congregation of the Sisters of Notre Dame. On February 11, 1958, she began the novitiate and received the name Sister Maria Mirna.

Sister Maria Mirna was a quiet woman, dedicated, kind, of profound faith and available for the work of the Congregation. The greatness of her person is not measured by her great deeds, but by her fidelity to mission. Wherever she went during her 55 years of consecrated religious life, she left marks of friendship and good will.

She lived her religious consecration with joy; however, she did not lack challenges and difficulties. She experienced moments of the silence of God, especially during her illness with cancer, which manifested itself in 2007. With resignation, she embraced the pain and the cross of her disease. Her spirituality, centered in Jesus and her profound love for Mary, gave her strength to embrace the cross and to fight to live.

Sister Maria Mirna, as the first born, showed great interest and zeal for her family. She was loved by her siblings and other relatives. She liked to visit them and to receive their visits. In gratitude and esteem, during the time of her disease, she had the comfort and the affection of her relatives who visited her frequently.

Her last community was the School Nossa Senhora Estrela do Mar, in São Lourenço do Sul. Due to her frailty and declining health, in mid-2014, she came to Recanto Aparecida for treatment. She nurtured the hope of returning to her community, but the rapid spread of the disease did not allow it.

On August 5 she received the Anointing of the Sick and, from then on, she entrusted herself to the hands of the Father saying: “I am ready…” During the years of her illness, she had the attention and care of her co-Sisters and staff who watched so that she did not lack anything.In death, she completed her act of absolute surrender and love to God and freed the seed of resurrection that hides inside our mortal life. Our faith tells us that Sister Maria Mirna already lives as resurrected in Christ.