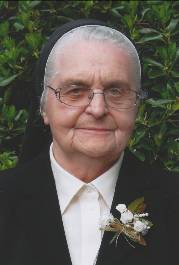 I was glad when they said to me, “Let us go to the house of the Lord!”

Sister Maria Auxiliatrix, Anna Stenzel, was born in Rissdorf, County Käsmark / Slovakia. Together with her two younger sisters she grew up in a family deeply rooted in faith. Her father was a self-employed master tailor whose workshop was next to the parental home. As a child, Anna spent many hours there, watching her father and his apprentices. When she tried her first sewings, she discovered her love for sewing. After completing basic primary and secondary school, she trained as a dressmaker.

In 1945, the family was expelled from Czechoslovakia because they were German. Anna could complete her training in Mecklenburg. In 1949, she and her friend succeeded in fleeing from the GDR to the west. In Bad Nauheim, she came to know the Sisters of Notre Dame and felt God’s call to follow him.

On January 16, 1950, Anna Stenzel began her religious formation in Mülhausen and made her first profession on February 8, 1953. In 1954, she passed her examination as a dressmaker and until 1990, she worked as a needlework teacher at a Housekeeping School, today’s vocational school of the Liebfrauenschule in Geldern. In 1957, Sister Maria Auxiliatrix was diagnosed with tuberculosis, and she could only start working again in 1960.

After retiring from teaching, she served as a receptionist in Geldern and from 2006 on she was also the sacristan.

When her physical and mental abilities were fading, she had to leave Geldern after 54 years and move to Haus Salus in Mülhausen, where she was lovingly looked after by her co-sisters and nurses. She lived her life silently and gratefully.

Sister Maria Auxiliatrix was a friendly and humorous sister and teacher. Generations of students remember her vibrant classes, her professional skills, and her kind and open personality. Only seldom did she talk about her suffering caused by the flight and the loss of her home town. Her mother’s reminding words when they were deported to a labor camp, “My child, never forget to pray”, remained deeply rooted in her heart and helped her to bring joy and suffering silently before God.

On the evening of May 4, she was sent to the hospital because of shortness of breath. In the afternoon of the day of her death, she said to her superior and later to her nurse, “I think the good God will call me tonight.” This was fulfilled in the late evening of May 6, when she quietly went home to God.