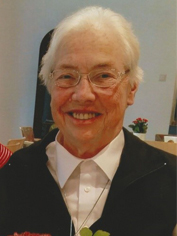 Sister M. Bonifacie, Lore Kreyenborg, spent her childhood and youth with her 4 sisters, of whom she was the eldest, in Wildeshausen near Bremen, where her father had a poulterer’s shop.

From 1947 to 1955, she attended the catholic, basic primary and secondary school in Wildeshausen. Then she spent a year as a housemaid at the Liebfrauenhaus in Bonn run by the Sisters of Notre Dame. In Bonn, she continued working as a housemaid in a private household and completed her training in home economics. After successfully completing the vocational school and the prescribed internship in a private household as well as in the big kitchen of the Heinrich-Haus in Engers, where she worked again with the Sisters of Notre Dame, she began her training as a housekeeper at the college for housekeeping in Bonn, which she completed successfully. After the probationary year and after working as a housekeeper in private households in Bonn for a short time, she followed God’s call to enter the Congregation of the Sisters of Notre Dame in Mülhausen in May 1962.

When she began her novitiate on April 14, 1963, she received the name Sister Maria Bonifacie. Sister M. Bonifacie worked as a housekeeper in the different large kitchens in Düsseldorf, Leuth and Mülhausen. Her colleagues and apprentices held her in high esteem because of her professional competence, her friendliness, her readiness to help and her humor.

In 1987, a severe case of cancer abruptly ended her professional ministry and demanded a painful parting from her workplace as well as accepting many years of illness and suffering.

From 1987 to 1994, she worked in the canteen at Vinzenzheim in Aachen and from 1994 to 2003, she took care of the kitchenette at the reception desk of the former House Salus in Mülhausen and of the chaplain’s rooms.

When moving to the new House Salus, she assisted at the reception desk for certain hours. She was friendly and ready to help, and she enjoyed meeting all the people who came to the house. She always took time to listen with interest and affection.

Sister M. Bonifacie silently bore her physical infirmities and pain which forced her again and again to withdraw. She loved the community, especially the feasts and celebrations in the house. She appreciated the community prayer, the Eucharist and the silent prayer in the chapel. They gave her strength when illness weakened her body more and more and when pain and infirmities increased.

She maintained close contacts with her sisters and their families, using rideshare opportunities to Vechta in order to visit her family.

During the last phase of her life, her cancer spread by growing metastasis in different parts of her body. She hoped for help by outpatient therapy, but on Wednesday, April 4, she had to be taken to the hospital in Nettetal-Lobberich, where she peacefully gave her life back into the hands of the risen Lord in the early morning of April 6.

We are thankful for her life and her being with us and we pray that she may find eternal joy in God’s loving embrace.