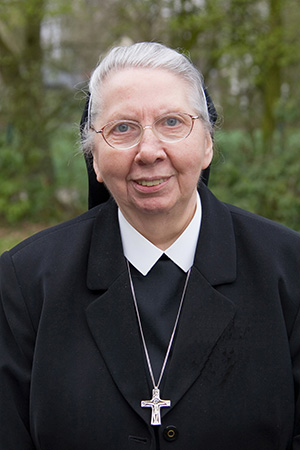 Sister Maria Franzeska, Paula Rump, grew up with six siblings in her parental home in Lastrup, County of Cloppenburg.

After completing school, she gained some professional skills in housekeeping and in the hotel and restaurant business. She extended her experience and skills during her two years of formation and occupation as an assistant cook with our sisters at the orphanage Antoniusstift in Damme. There she also came to the decision to enter our congregation.

Since it was not allowed to take up a religious profession in national socialist Germany, Paula Rump began her formation as a nurse’s aid in the military hospital in Ahlen in 1943. After the confiscation of our motherhouse in Mülhausen, our novitiate had been transferred to the school in Ahlen, which was used as a military hospital. The official training as a nursing assistant enabled her to also secretly follow her religious formation together with other young women. After the war, in October 1945, she completed her novitiate by making her profession in the motherhouse in Mülhausen.

Until 1963, Sr. Maria Franzeska was in charge of the cooking in different institutions for respectively one or two years, taking care of the well-being of students, staff, guests and co-sisters. “She was a good cook,” a co-sister said, guests praised her “excellent cooking,” former apprentices and students were enthusiastic about her salads and her baking skills. Sr. Maria Franzeska readily taught her skills to those who wanted to learn from her. She created a positive atmosphere in the kitchen and loved trying something new.

During the first years of her ministry, she readily accepted the relatively frequent transfers between Kempen and Pyrmont, Vechta and Münster. After this, she held the responsibility of cooking for the inhabitants and guests at Liebfrauenstift in Münster for several decades from 1963 to 2002.

For Sr. M. Franzeska, community prayer was as important as her personal relationship with God. Prayer was the source of her life, which gave her strength also at difficult times and in challenging situations. She enjoyed music, especially musical events in churches. In her free time, especially during her holidays, she relaxed by taking bike trips.

She maintained close contacts with her family and loved meeting them. During the first time of her retirement here in the convent of Kloster Annenthal, she went on riding her bike. Problems with her bones and surgeries made the last weeks of her life difficult. This greatly restricted her excitement about her 90th birthday, which she was able to celebrate only in a limited way. However, she consciously said good-bye to her expectations and embraced the approaching end of her life. So she was able to part from us in the peace of Advent – and go home to her God and ours. We are grateful to our dear Sister M. Franzeska and we thank God for her presence among us.