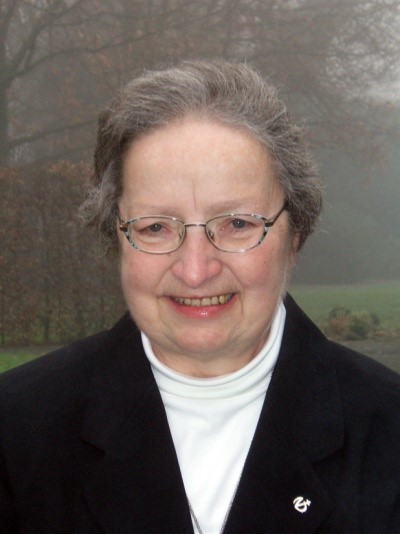 Sister Maria Magdalene, Maria Roeseling, grew up in Cologne with her two-year-older brother. Her childhood and youth were marked by severe losses: When Maria was 11 months old, her mother died. Until she finished elementary school (1947-1951), a sister of her mother’s kept house and in the following six years there were different housekeepers. So Maria had to share in the responsibility for the family while attending a modern language grammar school.

She had a close relationship to her brother and to her father, who had been “her best teacher”, especially regarding her musical promotion and education. The Sunday domestic music with her father and brother was a special joy to her, which came to a sudden end when her father died of a serious illness on New Year’s Day in 1960. So he could not be present when Maria graduated in 1961.

After grammar school, Maria attended the teacher training college in Cologne to become a primary school teacher. She passed the first and second state examinations successfully.

In 1967, Maria asked for admission into our Congregation in Coesfeld. After completing her religious formation, Sister Maria Magdalene ministered as a teacher in our vocational school in Coesfeld from 1970 to 2005. She taught German, mathematics, and religion. She was a dedicated teacher who cared especially for the promotion of the weaker students. She was friendly, patient, and humorous. She accompanied many a student even beyond their school years. The staff appreciated and respected her.

It was a special concern of her heart to accompany young women who spent a Voluntary Year of Social Service as temporary missionaries with our sisters abroad.

For decades, Sister Maria Magdalena was active as an organist and choir leader in our community. It was with great joy and commitment that she prepared and accompanied our liturgical celebrations. After her retirement, she ministered for several years in a center for senior citizens in Coesfeld, where she prepared the liturgy and prayer services. This service was gladly accepted.

Apart from the liturgy, Sister Maria Magdalene drew her spiritual strength from the spirituality of Julie Billiart, our spiritual mother, as well as the spirituality of the Focolare Movement. She had a special devotion to Our Lady whose belief and trust in God’s providence even in difficult and incomprehensible situations was a model for her. This religious foundation helped Sister Maria Magdalene to accept various diseases which she had to endure for many years.

She knew that she was carried by her community, by her family and friends, who accompanied her especially during the last phase of her life, and by the staff of the infirmary. May the words “Take heart, it is I” now come true for Sr. M. Magdalene in the glory of heaven.