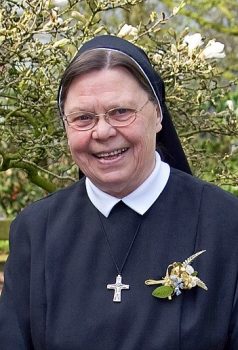 Sister Maria Magdelene, Agnes Middendorf, and her twin brother were born in Langwege/ Dinklage, County Vechta. Together with 8 brothers, 3 sisters and a foster sister she spent a happy and carefree childhood in the security of her parental home. Since their house was in a forest, Agnes and her siblings developed a close connection to nature. The vitality and deep faith of her parents, which influenced her even beyond their death, and her close connection to her siblings and her continuously growing family were an important foundation of her life that sustained her until her death.

In 1941, Agnes started school. After completing her schooling, she helped in her parental household and then she worked on a farm and in different families.

While working in our orphanage in Damme, Agnes got to know our Congregation and in October 1957, she asked for admission into the novitiate of the Sisters of Notre Dame in Coesfeld.

After her religious formation, Sister Maria Magdelene ministered in various houses of our Congregation, especially in the field of education. She spent many years at Vinzenzwerk Handorf e.V., a childrens’s home in Münster-Handorf. When she left this ministry for specialized professional training, her great commitment, her expertise, her sensitivity and her way of assisting those entrusted to her were especially appreciated.

Sister Maria Magdelene trained as a teacher for children with special needs so that she could better assist the marginalized.

For 12 years, she worked in a community for the homeless in Hamm with outstanding dedication. This community was run by the German Caritas Association. Sister M. Magdelene ministered in a day care center for children, at the same time assisting families and individuals. She was able build up trust also among the inhabitants themselves and to establish contacts with the parish.

In the homeless community there were also large Sinti families. This ministry was a highlight in Sister’s life because she had already wanted to work for Gypsies at the age of 14. She won their trust, confidence and respect. She was lovingly called “Gypsy Mum.” Recognizing and honoring her dedicated service, Schwester Maria Magdelene was awarded the Order of Merit of the State of North Rhine-Westphalia by Minister-President Johannes Rau on September 28, 1995

At the request of Reinhard Lettmann, bishop of Münster at that time, Sister Maria Magdelene provided voluntary pastoral care for the Sinti from 2006 – 2014. Radiating hope and optimism, she did much good among them. She believed and helped others believe that God loves everyone and that everyone deserves respect and esteem.

After retiring from her ministry, she was again able to dedicate more time to her love for nature in Kloster Annenthal. We all remember her raising 10 geese, for example.

Sister’s last years were marked by illness. In this process of letting go she was lovingly accompanied.

Now the Lord will surely welcome her in His glory with wide-open arms!