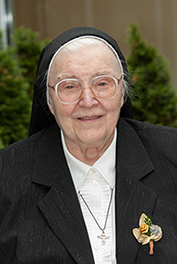 From 1930 – 1938, Maria attended the basic primary and secondary school in Vreden; she completed her studies with great success. In her leaving testimonial, her diligence, her interest, and her perseverance were especially underlined. From 1939 – 1942, she completed a commercial apprenticeship program in Vreden; she was again very successful; she continued working in the company.

Maria was closely connected to her parish and gladly participated in its activities. Her contacts to our sisters at Josefshaus had great influence on her, especially during the years of National Socialism. Josefshaus was the nucleus of a resistance movement against Hitler, who persecuted the Church, priests and religious. Maria joined this resistance together with other committed people from Vreden. Rooted in faith, she bravely stood up to the interrogations by the Gestapo.

In 1946, Maria asked for admission into the novitiate of the Sisters of Notre Dame in Mülhausen on the Lower Rhine. After her religious formation, Sr. M. Salome ministered as a school secretary at our school in Oldenburg for several years. From 1959 – 1976, she assisted in the provincial administration at the Liebfrauenburg in Coesfeld. Great commitment, reliability, and availability characterised her.

Having a heart for the needy, Sr. M. Salome recognized their needs and together with our meanwhile deceased Sr. M. Gesina she packed goods for our missions in Brazil and for our co-sisters in East Berlin who were separated from us by the wall. From 1976 – 2011, West Berlin was the center of Sr. M. Salome’s life and ministry. It was a fruitful and enriching time for her.

Since Sr. M. Salome had continued her education by attending social, theological, and pastoral programs in Münster and by attending the Theological and Pedagogical Academy in Berlin, she gained the qualification as a pastoral minister in the diocese of Berlin in 1980. In this function, she not only worked in the parish but also at the Episcopal Ordinariate and as secretary for the Plenary Council. The cooperation with Cardinal Meisner, with whom she was in contact for many years, was very enriching for her.

The fall of the wall in 1989 with the following changes in the society in Germany was a new challenge for Sr. M. Salome, namely to build bridges in the hearts and heads of the people from the east and from the west. From 1992 on, Sr. M. Salome worked as a volunteer in a facility for senior citizens. There, too, she did her ministry with great commitment; she accompanied the residents, offering them spiritual support, deepening their faith, and bringing them hope.

In 2011, she left Berlin and moved to Coesfeld where needed had to adapt to a new situation. Her co-sisters and the staff at the infirmary helped her to settle into her new environment.

In peace and calmness she could prepare herself for the final coming of the Lord. May she now rest in His peace!