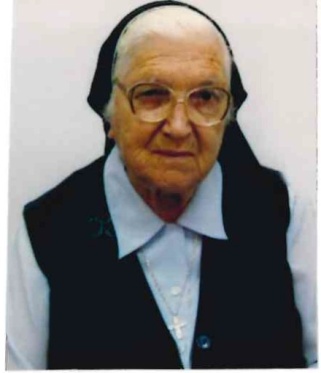 Berenice Conte was the oldest of the five children born to Luigi Conte and Carmela Carcillo, who cultivated land in Viticuso / Frosinone. In her parish church of the Assumption of Our Lady, she was introduced into the Christian faith. There she received the sacraments of baptism, first communion and confirmation. After completing compulsory schooling, she stayed in her parental home to help her mother with the hard work in the fields. At home, she took care of her smaller siblings after her father had died in the war in Africa in 1942.

From her mother she learned Christian charity, she helped people in need, e.g. her friends when they had problems. The Christian education which she had received in her parental home predestined her to follow Christ in religious life. She got to know our sisters who worked in Monteroduni and on October 31, 1952, she entered our congregation in the provincial center in Via Como 41 in Rome. At her investment, she received the name Sister Maria Teresia.

As a junior, she did domestic work in Vicarello. At the same time, she attended a course in sewing which was very useful for her ministry in Monteroduni, in Carpinone and in the provincial center. After her tertianship and her final vows in 1960, she committed herself to young people by offering sewing courses and courses in home economics. Back in Rome, she obtained a diploma as a nursery teacher and the license as a catechist. From 1973 to 1988, she worked as a kindergarten teacher and as a catechetist at school and in the parish. The children were fascinated by her calmness and her competence and they followed her teaching with attention and great interest. For many years, Sister Maria Teresia was local superior in Carpinone, Monteroduni, Cadibona and Rome.

After the school in Rome had been closed, she committed herself wholeheartedly to sewing and gardening. She liked working in nature and took loving care of plants, flowers and fruit trees, which thanked her by showering her with wonderful blossoms and a rich harvest.

She was always active, even when her health was failing. A sudden stroke was for her the beginning of a long, strenuous and painful way to the house of her Father. In the morning of September 30, 2015, while the community was gathering for morning prayer, she gave her life back into the hands of the Father. May God reward her faithfulness and her quiet dedication.