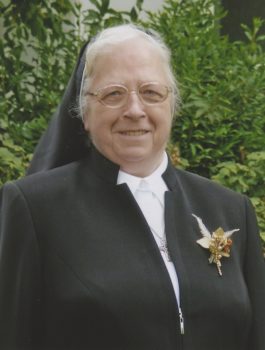 Sister Maria Thecla had chosen as a motto for herself Peter’s answer to Jesus’ question about his love. She herself connected her answer with that of Peter and lived it in her very own way.

Sister Maria Thecla – Hermine – was the youngest of the six children of the married couple Nikolaus and Maria Rolfes and grew up with her five sisters on the parental farm.

After finishing elementary school, she completed an agricultural apprenticeship, from which she graduated with the examination in 1956. Therefore it was natural that after her entrance into our Congregation and the novitiate her first ministry was to assist in large kitchens. But also her love for children was well recognized, and so she received training in childcare.

From 1963 to 1988 she was in charge of groups in various children’s homes of the former Maria Regina Province of Müllhausen. At that time there was no co-education and she was entrusted mainly with groups of boys, probably also because of her good assertiveness. Whenever possible, Sister Maria Thecla responded to the children’s wishes and the children knew that she always stood by them. For 17 years she had a group at St. Annenhof in Kempen and her contacts indicate the good relationship she had with “her boys” – as she called them. She was in regular contact with some of them until the end; Peter in particular was loyal to her until the end and visited her just a few days before she died.

After her educational service, Sister Maria Thecla lived in the Bonn communities and was responsible for laundry, chapel decorations and driving services. Then, in 2015, she came to Haus Salus in Mülhausen for her so-called retirement, although she did not live like a retiree, but was always on the road a lot.

Sister Maria Thecla lived her life joyfully and gratefully. Until the last phase of her life she remained independent and self-determined. Even in old age, she maintained many contacts and was open and affectionate to everyone she met.

The last weeks of her life were very difficult for her to bear. After several strokes, she, who enjoyed being outdoors so much, was confined to her bed. Her speech center was disturbed; she, who liked to talk so much, could no longer express herself properly.

At noon on January 9, she was redeemed by God. May she now rest in peace.