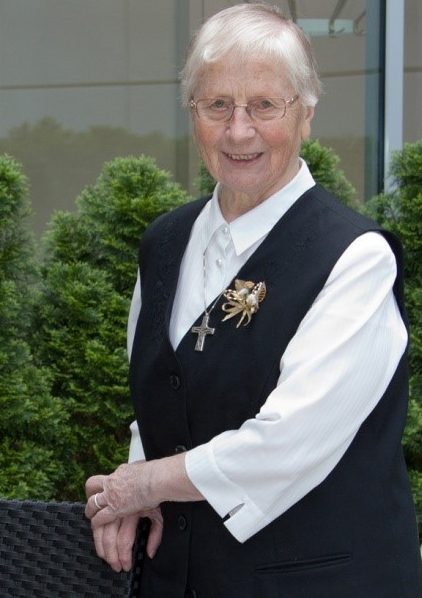 Sister Maria Wendelina, Ida Schemming, was the third of seven children. From 1942 to 1950, she attended the school in Vreden. Then she stayed in her parental home to help her mother with the work. In 1952, she was a domestic helper on a farm. In 1953, she worked in “Haus Meeresstern,” a children’s home of our sisters on the island of Wangerooge.

In 1954, Ida asked to be accepted into our Congregation in Coesfeld. After completing her religious formation, Sister M. Wendelina ministered in different houses of our congregation: in Bocholt, Marl, Allagen. She worked there with great commitment in various nursery schools of the parishes.

In addition to her training as a kindergarten teacher and after-school teacher, she acquired the Montessori diploma to be able to support the children entrusted to her comprehensively. She also participated in courses on posture education for young children and in a further training for early music education.

As principal, Sister Maria Wendelina was highly appreciated by educators, parents, and children. Her educational style, her friendly, approachable behavior, her responsiveness to the needs of the children made obvious that the children were really at the center of her ministry. Later, after her final farewell from the kindergarten work in 1989, she loved talking about her many nice experiences.

After ministering in Kloster Annenthal and in our house in Ahlen/Westphalia, she was sent to the guest house Ludgerirast of the Benedictines at the abbey in Gerleve, Billerbeck. By her friendly, unobtrusive manner, she was a blessing in the care of the guests. She has left “traces“.

In 2009, Sr. M. Wendelina returned to Kloster Annenthal where she assisted a co-sister in the care of the refectory for several years. She performed her services calmly and prudently.

During the last months, Sister Maria Wendelina’s physical condition changed seriously, and she needed more assistance. After a longer stay in hospital, she came to our care station. There she received the best possible care and support. She was very grateful to all our collaborators, and she repeatedly expressed her gratitude. She felt safe and secure. She was in harmony with herself, with the community, and with God and she was able to return her life into God’s hands with serenity and trust. In this way, the Advent expectation of the coming of the Savior has already been fulfilled for Sister Maria Wendelina.