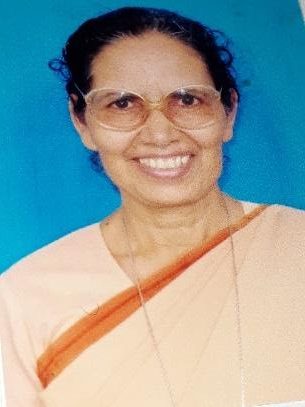 Anna Mathew was born to Mathew and Mary Varakukalayil. She was baptized on August 10, 1948. Of the 8 Varakukalayil children, Anna was the 6th child. She received her first Holy Communion on April 30, 1955, and she describes it as the happiest day of her life. She received the Sacrament of Confirmation on December 22, 1957.

She did her primary school studies in the Parish School. From the time she completed her primary school she had a great desire to be a missionary sister. When she completed her High School studies, she expressed her desire to be a missionary but her mother did not agree to it. She was told she could join any convent in Kerala. So she joined the Franciscan Clarist Sisters. God’s intervention came to her in the form of a skin allergy on the face to fulfill her desire to be a missionary. How good is the good God who fulfills every one of our hopes and desires! Since she had to be under medical care, she could not enter the Novitiate that year. While she waited at home, she came to know of the Sisters of Notre Dame and she promptly went to meet them without her mother’s consent. She met the Sisters and in ten days’ time got ready to travel to Patna, Bihar, and to make Notre Dame her permanent home on June 17, 1967.

After completing her Novitiate training, Sister Mary Synthia was assigned to several Notre Dame Schools. Sister was a meticulous and brilliant teacher for several years before she was assigned to be the local superior in Musgutri, Chattisgarh and Munger, Bihar. Sister completed her degree studies at the Teresian College, Mysore and the Regional College of Education in Bhubaneswar. She was also the Principal of Notre Dame Academy in Munger. For three years she taught the candidates in the Formation House, Mysore.

Being kind, gentle, soft-spoken, patient, and meticulous in all that she did Sister Mary Synthia was the ideal person to be trained to take on the responsibility of being provincial secretary. She received her secretarial training in Bangalore, tenaciously learning the intricate working of the computer system that was just coming into use in India. She was missioned as provincial secretary for 12 years in the Our Lady of the Assumption Province, Patna, and 3 years in the newly formed Province of Our Lady of the Visitation, Bangalore.

God knows what is the best plan and purpose for each one of us. Sister Mary Synthia began to lose her memory gradually and we found her under the shadow of this cross for the past 10 years – steadily deteriorating in all her faculties. She has been most patient, gentle, and enduring in her suffering and we consider it as a blessing for the Visitation Province as she silently suffered all her pains and discomfort. The doctor attending to her spoke of her as a “living miracle and an angel”. We, the Sisters of Notre Dame, graciously acknowledge the contributions made by her during her good years and her declining years of being unwell with her presence and prayers.