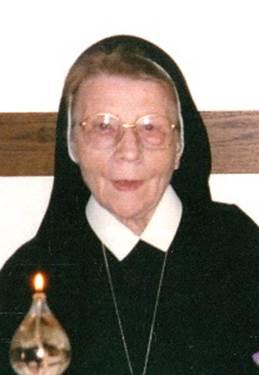 After a long time of suffering, God called our Sister Maria Xaver home to himself in the early
morning of June 6, 2013. For many decades she enriched in the liturgy of her respective local
community by playing the organ in the morning.

Elisabeth Steinhoff was born in Ahlen as the daughter of Heinrich Steinhoff, who owned a shoe
factory, and his wife Katharina. She grew up with eigth siblings. After going to elementary school,
she attended the fifth grade of the high school in Ahlen, but soon she had to leave the school
because of a serious illness. One year later, in 1925, Elisabeth came to the Sisters of Notre Dame in
Rheinbach where she attended the St. Joseph boarding school from which she graduated with the
Abitur. In addition to constantly living in community with peers, she found rich values for life and
education in her active involvement in the Liebfrauenbund, over which she herself presided for some
time. Her love of literature and of music, especially playing the piano, further enriched her education.
Attending courses and excursions, she came to know and appreciate her German homeland, which
later helped her in teaching geography, which she chose as her subject in addition to German.

Beginning with Easter 1935, one year after her entrance into the congregation of the Sisters of Notre
Dame, the focus was on her training in methodology and psychology. With a solid theoretical
foundation Sister Maria Xaver began her ministry as a teacher in the elementary school and by
sitting in on classes and giving assessed lessons in the 6th and 7th grades. After another year of
training in Straubing, she ministered in the Vincenzhaus in Cloppenburg as a teacher in a basic
primary and secondary school from 1937 to 1946. While teaching at the Liebfrauenschule in Köln
Sister Maria Xaver prepared to take the exam as a teacher at junior high schools, which she took in
1954. Then she taught at the Liebfrauenschule in Bonn, until she was transferred to the junior high
school in Ratingen in 1960, where she ministered diligently and with much enthusiasm for 25 years.
After retiring from teaching, she still liked to tutor individual students. Preparing the liturgy and
playing the organ also meant a lot to her and witnessed to her deep relationship with God. Former
co-students from Rheinbach and students from her time in Bonn enjoy their memories of her and
kept contact with her.

In 1996, Sister Maria Xaver came to Haus Salus, where she quietly and unassumingly put up with
the burdens of old age and illness and was grateful for any service or attention she received. Just as
she had needed clear structures in her life of ministry, she kept structures in her every day life as
long as her strength and her mental abilities permitted it. During the past years her physical and
intellectual health declined, so that she entirely depended on the help and support of the health care
personnel and her co-sisters.

Her quiet death on June 6, 2013 was the fulfillment of her rich life in the service of God and the
students who had been entrusted to her.

We are confident that the good God will receive her in his grace and welcome her into his eternal
Kingdom.