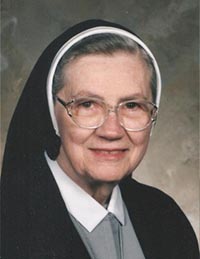 Early in the morning of Tuesday, July 30, Sister Mary Marilyn entered eternal life after seventy- two years of religious commitment as a Sister of Notre Dame. She was the oldest of four children born to Edward and Elizabeth Mayle of Norwalk, Ohio, along with her sister Mary and her two brothers Richard and Frank. On June 29, 1919, Rita was baptized by Father Victor Studer, the first priest-son of St. Paul Parish, on the day of his First Solemn Mass. Rita attended St. Paul’s Elementary and High School. There, as she became involved in sports and social activities, her charming personality and humor were honed.

Sister shared that on the day she told her parents that she wanted to enter the Sisters of Notre Dame, her mother told her of a promise that she had made—that if God blessed her with a child, He could claim her back if he so wished. Sister Mary Marilyn believed that her religious vocation was seeded in this promise of her mother.

In September of 1937, Rita entered the Sisters of Notre Dame in Toledo. After her profession of vows in 1940, she continued her education by receiving degrees from DeSales College in Toledo, and Catholic University in Washington D.C. She also became certified in administration through the University of Detroit. For forty-six years she taught English and Business in high schools in Ohio and Illinois. In 1969, she was missioned to Papua New Guinea where she was a teacher and headmistress at Notre Dame High School until 1974. Sister Mary Marilyn loved working with teenagers and her students loved her in return.

Retiring from teaching in 1987, she devoted herself to pastoral and community service at St. Mary Parish in Sandusky for eight years before returning to the Provincial Center and Lial convent for her retirement years. Sister Mary Marilyn moved among us in community “without fuss or fanfare.” Her bearing was unpretentious, marked with a warm friendliness and a wonderfully subtle sense of humor that would often bring laughter into our lives.

In February of 2013, Sister’s health care needs made it necessary for her to take up residence at the Ursuline Center. She quickly endeared herself to staff and residents as she accepted her decline with patience and grace. Her longing to go home to God was finally realized in the early morning of Tuesday, July 30. May she experience the warm embrace of the God she so dearly loved and served for 94 years.