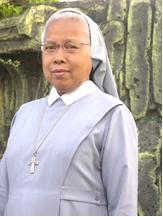 Christina Ponidah was the oldest girl of the three sons and six daughters born to Setroredjo and Murtidjah, a Muslim family. Ponidah was baptized on September 9, 1954, in the Church of St. Augustine, Purbalingga. Ten days later, in the same church, she received the Sacrament of Confirmation by Mgr. W. Schoemarker, MSC.

Christina Ponidah responded to God’s call to religious life by entering the Sisters of Notre Dame as a postulant in Pekalongan on August 15, 1961. At her investment on July 8, 1962, she received the name Sister Maria Agusta.

In everyday life, Sr.M. Agusta was firm, loyal, prayerful, disciplined, hard-working, responsible, and gentle. Sister always drew strength from Jesus, Mary, and Joseph, who became her models in carrying out her mission. Pekalongan became sister’s last place of retirement, and she worked in the sewing room.

Since 2019, sister had not been able to carry out her work in the sewing room any longer due to illness. She suffered from hypertension, diabetes mellitus, and a stroke. Sister was undergoing treatment at Budi Rahayu Hospital, Pekalongan. She sacrificed all her suffering to her beloved Jesus and to Mother Mary. Sister’s health began to decline in April 2021, and she had to be hospitalized. On 15 November 2021, Sister Maria Agusta went peacefully home to God in the Budi Rahayu Hospital in Pekalongan.