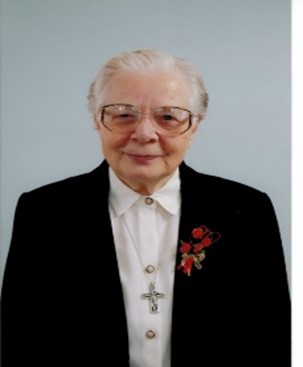 November 19th, a Saturday, the day dedicated to Our Lady, dawned radiant and sunny. As one greatly devoted to Mary, it seemed Sister M. Beatriz chose this day on which to make her final commitment to God who called her to celebrate the fullness of love and life with him in eternity.

Celia Dolores Plentz was the sixth among the 16 children of José Mathias Plentz and Maria Cecilia Diel Plentz. At that time, two of her brothers and one of her sisters had already died. As a little girl, Celia met the Sisters of Notre Dame in Não Me Toque. Touched by their testimony of selfless service, she wanted to enter religious life. She entered the Novitiate in 1943, receiving the name Sister Maria Beatriz. Her blood sister, Sister Maria Elmy Therezinha, who died in 2002, was also a Sister of Notre Dame. In addition to the two daughters in religious life, the Plentz family had the grace of having a son in the priesthood, Fr. Octacilio Marino Plentz, a Redemptorist priest who died in 1973.

At the beginning of her religious life, Sister Maria Beatriz was a teacher. After her final vows, she was sent to the Generalate and Motherhouse in Rome.  For the next 52 years, Sister served first as Secretary for Brazil, then as Assistant General (ad interim) from 1970 to 1974, and lastly as Secretary General and Archivist from 1974 to 2002.

Sister M. Beatriz was fluent in Portuguese, English, German, and Italian, in addition to having an average command of French, Spanish and Dutch. During her time in Rome, she collaborated with five Superiors General in the administration of the Congregation: Mother M. Vera, Sister M. Anselm, Sister M. Raphaelita, Sister M. Joell, and Sister M. Sujita as well as several provincial superiors. What a great part of our history Sister recorded or kept in her heart! It is not surprising that many sisters referred to her as the living archive of the history of the Congregation and of the Church.

In October 2002 Sister Maria Beatriz returned to the Holy Cross Province. Reflecting on her time in Rome, Sister wrote: “My heart overflows with gratitude. How many blessings in these 52 years and a half living at the Center of Christianity and the Congregation! My dear God, I praise you and bless you. Among so many, you chose me to come as the first Brazilian Sister to the Mother House in Rome, in the Holy Year of 1950, the Centenary of our Congregation. How many graces and blessings I have received since then.”

In Brazil, Sister resided in the Provincial House where she summarized the annals, did translations, and was responsible for the general correspondence. She loved reading, community life, and time for prayer. To cheer people up, Sister always had a poem, a funny anecdote, a picturesque or historical fact to share; whatever made people feel good in her company.

Beginning in 2010, Sister Maria Beatriz needed assistance with daily activities so she joined the Casa Betânia Community. In 2019 Sister M. Beatriz became bedridden. However, she was always interested in news from the world, the Church, the Congregation, and the Province. She often communicated with the members of her family who were grateful to be able to drink from such a well of wisdom that was Sister M. Beatriz.

In the traces of the good God, Sister Maria Beatriz wrote her own story and recorded the story of so many sisters as well as the history of the Congregation. Now, with God, may she intercede with God so that the Congregation of the Sisters of Notre Dame may continue to write the history of God’s goodness and provident care for many generations to come.