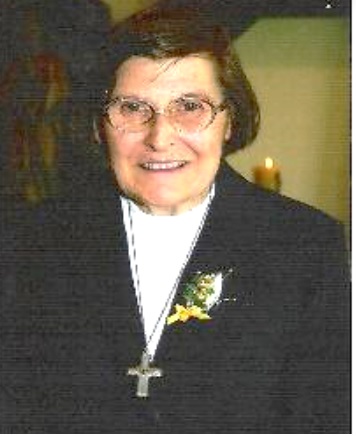 “It is good to give thanks to the Lord, to sing praises to your name, O most High”. Psalm 92,1

We could say that Sister Maria Lucia internalized Ps 92.1 in her life since she loved to sing the praises of the Lord. Lucia was the daughter of Fiorindo Forte and Mathilde Dalla Costa Forte. She was born in a large and deeply religious family, the sixth of twelve children.  Lucia used to share that praying the rosary was part of the daily family commitments.

From her family, she inherited a great devotion to Mary which she cultivated until the end of her life. From an early age, she felt called to religious life. Her sister Maria had already joined the Congregation of the Sisters of Notre Dame. Following her example, Lucia entered the novitiate in 1955, in Passo Fundo. Being part of the Notre Dame family, she lived out our charism: “A deep experience of God’s goodness and provident care.”

The family´s subsistence came from agriculture and, from an early age, the Forte children had learned that work is part of life. From the second year of novitiate on, Sr. Maria Lucia devoted herself to domestic activities.

For many years she coordinated the general services in our communities and schools and was very careful about the household goods. She cared for the planet,  attending to small things like the responsible use of water, electricity and all the goods of creation. When ministering in schools, usually she was the last one to leave after evening events, remaining until all the work had been done and the school was in order for the next day.

Lucia was very sociable. With her simplicity, she won the hearts of children, adolescents, and adults. She was a gracious presence among the students during their breaks and knew almost all by name. She had little education, but sought self-education by attending courses in catechesis, Bible, liturgy and professional topics. Her apostolic zeal was outstanding. For many years, on Saturday afternoons, she assisted with religious classes in the Estância Velha Village, Canoas. She was “sui generis” in her catechesis classes, often acting from a fundamentalist perspective and without having proper theological knowledge, but her loving manner captured the children’s and adolescents´ hearts, bringing them closer to God. For many years, she devoted herself to pastoral care, weekly visiting and bringing comfort to the sick at ULBRA Hospital, especially to the children in pediatric units.

Her hobby was making candles, and she felt great joy in offering them to those interested.

In her simplicity, she was honored by the Canoas City Council with the “Picucha Milanez” award, an award granted to women who excel in their fields. Sister Maria Lucia was recognized for the good performance in the activities she undertook and for her tireless ministry to the children.

From July 2018 on, it was clear that Sister Maria Lucia was losing her strength. At that time, she was living at the Provincial Center, and was then transferred to Recanto Aparecida Health Care Center for further treatment. She was offered every treatment possible, but her physical and emotional conditions kept weakening until her total surrender. With increasingly poor health, she was admitted to Nossa Senhora das Graças Hospital, in Canoas, on December 26, 2019. On January 4, at 8 p.m., after receiving the visit of her brother Érico and her sister Terezinha, she departed to the Father´s home.