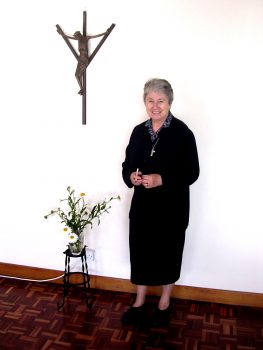 Marion was the middle child of three girls and one brother who died as a young child. The family worked hard in the war years to give the children the Catholic upbringing that was their heritage. All three girls attended the Convent School in Kettering run by the Ursuline Sisters first and later by the Sisters of Our Lady. Finishing school at eighteen, Marion entered the novitiate in Hoddesdon in 1959.

After her profession Sister Marion continued her education in teacher-training with the Sisters of the Assumption in London where her older sister had preceeded her. She trained as a primary school teacher specializing in music.

Her years in the classroom and as a head teacher in both St. Thomas More School in Kettering and St. Cross School in Hoddesdon were her delight. She loved to be with the children and her greatest love was sharing her musical talent with them. Her music stretched into any parish she lived in, playing the organ for all and any liturgical celebration, as well as preparing carefully for the parenting groups assisting parents in initiating their children for their religious upbringing.

She loved the Congregation. In community she was a lively member, participating in all activities. Her community leadership began as soon as she retired from school, and she continued to bring life to all. Her great love at this time were the student Sisters who came from Korea, Indonesia and Brasil to learn English for service to the Congregation. She made sure that their stay over two years was an experience of England – not just the language. They were given excursions in England, Scotland and Wales, visits to London, an English retreat and much more.

Although illness was diagnosed five years before her death, she only allowed it to take possession of her in the last year. It was a year of continual submission of her talents, her physique and her will. She suffered greatly and unnecessarily in the last months as she gave back each part of her grace-filled self.

The Lord gave, and the Lord has taken away.
Blessed be the name of the Lord.
May she rest in Peace.