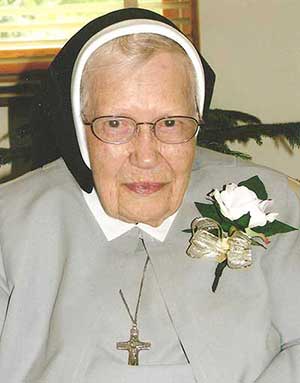 In the early afternoon of Wednesday, September 18, Sister Mary Corneille Gallam, age 98, went home to the God she so faithfully served in Notre Dame for seventy-five years.

Martha was warmly welcomed by her parents John and Rose Mehnen Gallam and her brothers Raymond and Carl. She attended school at Immaculate Conception School and Bellevue Public High School. At the age of twenty, she made the life decision to enter religious life and entered the Sisters of Notre Dame in Toledo in 1935.

Martha Rose assumed the name of Sister Mary Corneille as she began her spiritual journey in the novitiate. She attended Mary Manse College where she received her BA, and was later certified in Montessori Education at the Montessori International in Washington DC.

In 1971 she was drawn to the Montessori Method of teaching which engaged children in the learning process and enabled them to develop the skills they needed to enforce their self-esteem. Sister Mary Corneille received her diploma from the European Association of Montessori International and then became the first Directress of the Montessori School at Lial. She taught the children to explore materials of their own choosing and so educate themselves. This spontaneous activity of the children then allowed them to become self-directed and engage in purposeful activity. All of this laid the foundation for Lial School as it has evolved into what it has become today.

After 48 years of teaching, Sister Mary Corneille experienced degeneration of her eyesight so that she needed to leave the classroom. She took up residence at the Provincial Center for the next 23 years before moving to Rosary Care Center in 2010. Her spiritual integrity allowed her to make this move without fear of what lay ahead.

Her love for community and family encouraged her to remain verbally alert to current news and remember facts about individuals so she could carry on a conversation with interest, enthusiasm and humor. Her exactness and sense of order allowed her to know where everything was even though she could not see it – from her favorite snacks to her jubilee candles.

May she now behold the Divine Light with eyes bright and heart open.