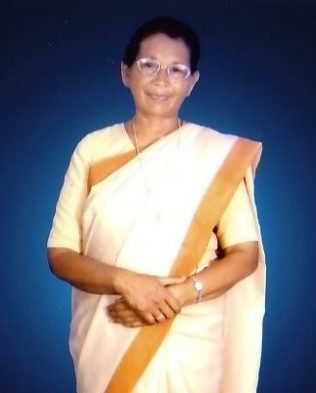 The parents of Dorothy Kiro were Benjamin Kiro and Elizaba Toppo. Dorothy was baptized on the day of her birth and given the name Dorethia. She grew up as the eldest of seven siblings in the joyful and faith-filled atmosphere of her home.

Dorothy attended the Ursuline Convent School at Samtolie, Ranchi, and completed her High School studies in 1962. She was sent to St. Xavier’s College, Ranchi, for her College studies. She graduated with a B.A. degree in 1967 and then attended the Teacher Training College in Ranchi. She graduated with a B.Ed. degree in 1968. Dorothy got a teaching job at Hartmann School, Patna, where she served for three years as a teacher of Classes IX and X. Dorothy was very much loved by the students, as she had a gentle, yet challenging way with the older girls.

Her Father, who was suffering from paralysis, passed away on September 8, 1973. Dorothy set aside her desire to become a religious, as she felt responsible to continue working to support her younger brothers and sisters who were all studying at the time. She got a teaching job at the Ursuline Covent School, closer to her home. In 1977, she had a chance of meeting with Sister Mary Peter Claver, who had gone to Ranchi to conduct a Seminar at St. Albert’s Seminary. At the invitation of Sister Mary Amala, Dorothy came to Patna and was accepted as a candidate. Dorothy entered the postulancy on December 8, 1979 and was invested on June 22, 1980, when she received the name Sister Mary Madhuri. She made her Perpetual Vows was on November 30, 1985.

Being a qualified High School Teacher, Sister Madhuri was involved in the apostolate of education in Jamalpur, Jurodanr, Dhanbad, Musgutri and Patna. Through privately following a course from Mysore University she obtained an M.A. Degree in 1995. She attended an Integrated Communication Course in Patna and a Bible Course at the Divine Bible College, Murringoor, Kerala. Along with her teaching ministry, Sister Madhuri has served as Headmistress of our School in Jurodanr, Hostel Warden of the Girls’ Hostel in Musgutri and Provincial Councilor in Patna for a term and Local Superior of Sevashram community. During all these years Sister M. Madhuri enjoyed good health.

In June 2019 Sister was diagnosed with Parkinson’s decease. With some assistance Sister was able to attend all the community gatherings until October 2021, when she was admitted to Kurji Holy Family Hospital where she was under treatment for over a month.

On January 14, 2022, Sister Madhuri was re-admitted to Kurji Holy Family Hospital for specialized care. She was on oxygen in the intensive care unit. Around 2:20 a.m. on March 23, 2022, Sister Madhuri quietly breathed her last. Our Infirmary helper Roshni was at her side. The body of Sister M. Madhuri was brought to the provincial house and laid out in the Agnes Hall for public viewing. The provincial house community had a touching wake service to bid farewell to dear Sister Madhuri.  The funeral Mass was at 8:00 a.m. on the following day. Archbishop Sebastian Kallupura concelebrated the Funeral Mass with six priests. The families of her sisters and brothers were present at the funeral service. The deep sentiments of love and appreciation expressed by the sisters testify to Sister Madhuri’s deep faith in God and her commitment to further the mission of Jesus through the holiness of life and service.