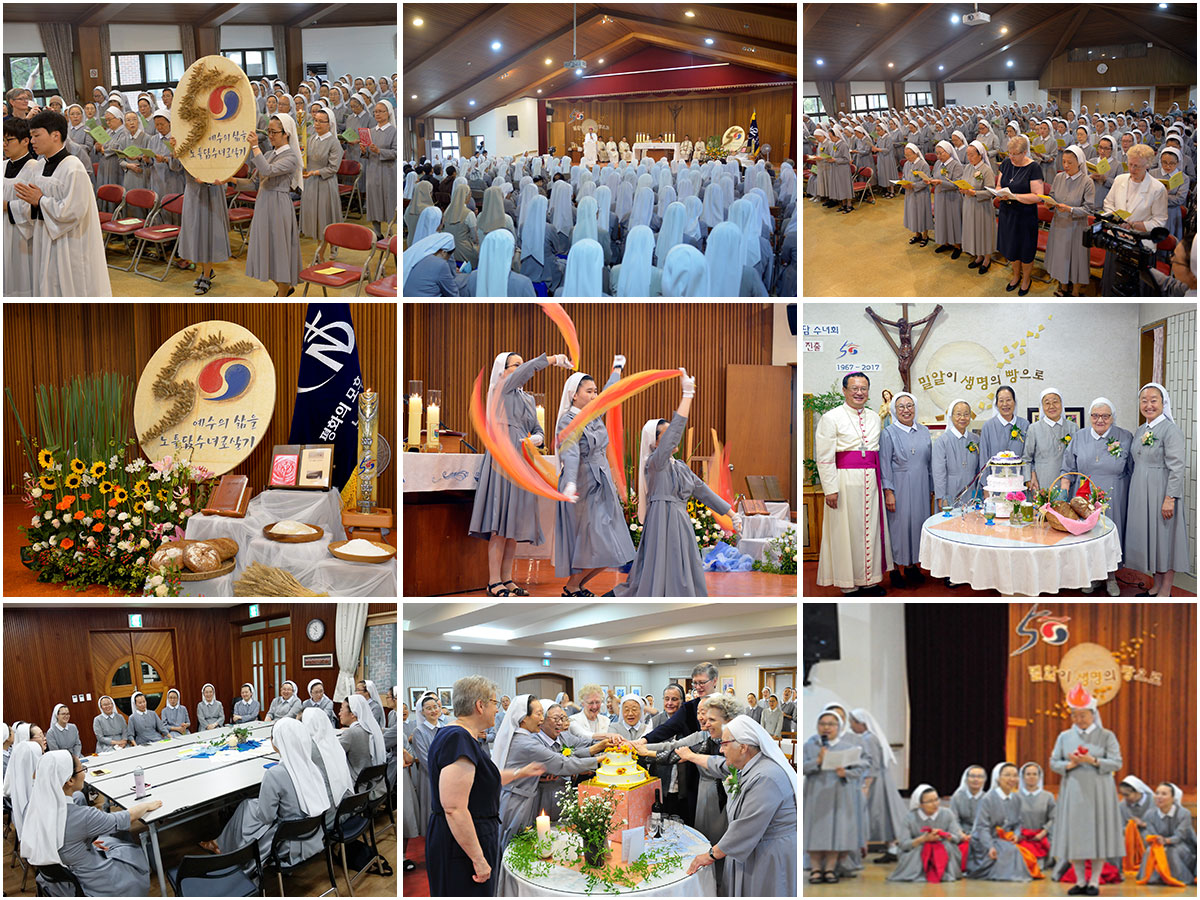 50 years of Notre Dame presence in Korea, the day of thanksgiving and celebration in Regina Pacis Province, Incheon

July 7, 2017 was the 50th anniversary of the presence of Sisters of Notre Dame in Korea. We also celebrated the Golden Jubilee of four sisters who had their religious formation in Germany or in Rome. This day Bishop John and priests of Incheon Diocese, religious, Sr. Mary Ann and Sr. Marie So-Wha from the Generalate, sisters from Coesfeld, Germany and Covington and associates were present. It was a day of thanksgiving and celebrating, when all those who had helped us and shared their love with us up to date were invited to grace the event.

Under the theme “A grain into living bread”, the anniversary began with morning prayer and exposition. In the morning, sisters spent some time in eight groups sharing joy by commemorating their religious journey from the initial formation. In the afternoon, there was a thanksgiving Mass started with a performance in which the process of a grain of wheat being sown to being harvested was represented, followed by a ceremony which consisted of Sr. Marie Aquina, the Provincial’s speech and appreciation, Sr. Kristin’s congratulatory address, playing a short film of 50 years of SND in Korea, presenting gifts to Sr. Maria Bertilde, golden Jubilarians, and German Province and American Province who offered us assistances at the beginning. After that there was dinner and the whole program was closed with a festival among members until late evening.

Incheon Regina Pacis Province dates back to 50 years ago when missionary sisters, Sr. Maria Alexandra, Sr. Maria Bonosa and Sr. Maria Bertilde set foot in Korean territory, as Seoul Community of Mühlhausen Province, Germany. At present 206 Sisters minister in kindergartens, schools, parish churches, welfare centers and many other places in Korea, China, Vietnam, Italy and the Philippines, bringing the love of our good and providential God.