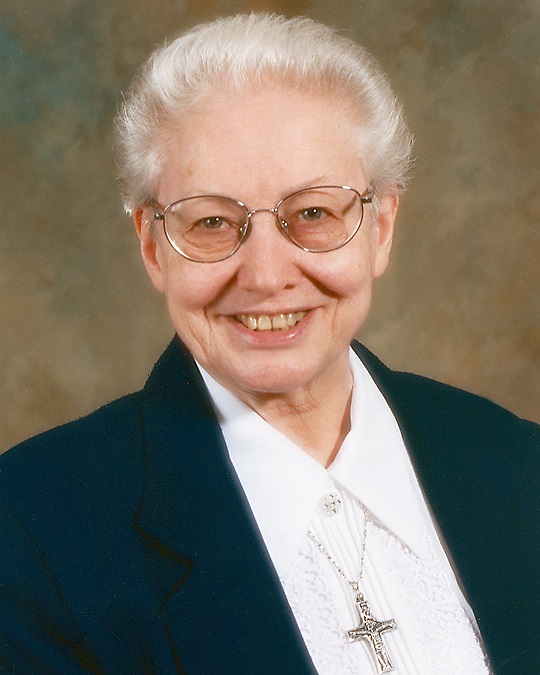 Rosemary Ruth was the fourth of the five children born to Herman and Elizabeth (Schneider) Mayer. She treasured her parents and siblings. Family, where strong, lasting bonds were nurtured, meant everything to Rosemary. Throughout life, she enjoyed and cherished visits, activities and celebrations with her very large extended family. It grew to be a source of energy and life as she held their joys and concerns in her daily prayer.

After completing elementary grades at St. Charles School, Parma, Rosemary attended Notre Dame Academy, Cleveland. At graduation, she reflected on the many benefits that came her way “through the selflessness of the sisters,” and realized that her choice of following Christ as a religious was blessed. She entered the novitiate of the Sisters of Notre Dame on September 8, 1948. At investment, she received the name Sister Mary St. Ignatius, and later returned to her baptismal name, Sister Rosemary.

Sister received a bachelor’s degree from St. John College, Cleveland, and a master’s degree from Marquette University, Milwaukee, Wisconsin. She ministered as an intermediate and junior high teacher for thirty-six years in elementary schools in Ohio and Virginia. With well-prepared, organized classes, Sister Rosemary dedicated herself to excellence in Catholic education. She worked hard to impart only the best to and for each child.

In 1988, when it became necessary to retire from active teaching ministry, Sister Rosemary dedicated herself to service to her sisters in community – supporting, encouraging, and praying for their needs. Sister could be found attending the Provincial Center switchboard, sharing her expertise as a seamstress and writing to the sick and homebound. She regarded contacts through the mail her apostolate and an extension of her own missionary outreach.

In spite of her own serious health problems, Sister Rosemary experienced life as a beloved family member, a faithful religious and community member, and a woman who served God’s people in many ways and in many places. She was grateful to all who ministered to her in her infirmity and learned to appreciate the presence of someone by her side. God used Sister’s big, strong heart, her great capacity for love, for His own purposes. As her sufferings deepened, the intimate bond between herself and her Beloved was sustained and strengthened. May Sister Rosemary’s new life bring freedom from suffering and eternal peace as she rests in the arms of our good and loving God.